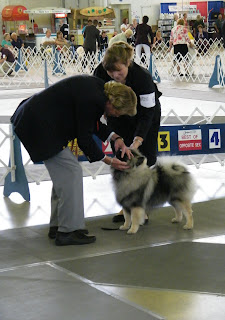 After a good deal of internal debate regarding whether or not I could handle the pressure of a dog show on my own, without the help or guidance of a mentor, I decided that I'd give it a try. Even if we walk away empty-handed, it will give me the opportunity to expose Zazzles to the sights, sounds, smells and overall hustle and bustle of dog shows. So out we set.

We went to Market Center in Dallas on Thursday morning to claim some space in the non-reserved grooming area. I have to admit that I was a little concerned about leaving my things there with no one to keep an eye on them, so on Thursday, I just took over the grooming table and crate to hold our space. We were packed like pickles when we came back Friday to get ready for our first show sponsored by the Texas Kennel Club. I quickly made friends with our new neighbors; since I was solo at this show, there was no one to pal around with.

Our ring time on Friday was reasonable. Despite hours of practice, I'd never done anything like this. We stood and watched while all the class boys did their stuff and the Winner's Dog was named. Then we were up, and Zazzles and I headed into the ring and around. This judge had chosen to use the "ramp" an apparatus we'd never practiced with before. We'd just watched all the boys do it, and everyone knows girls are smarter than boys, so how hard could it be, right? Zazzles went half-way up the ramp, then jumped off to the front so I had to go around, pick her up, and set her on the platform at the top. I'm sure I blushed, looked at the judge and said, "We've never practiced this." Fortunately, our little misstep didn't seem to bother the judge. She looked Zaz over, then told me to take her down and back, and awarded us 1st place for the 6-9 puppy bitch class. We were the only entry in that class. My next blunder was that I didn't wait for the blue ribbon, and the steward called me back in by waving the ribbon in the air and saying, "Excuse me, this is your ticket back in!" After the other bitch classes were complete, Zazzles and I went back into the ring to compete for "Winner's Bitch", and this is where it gets really exciting, because we won! First time in the ring, and we won. WOW! Winner's Bitch and Best Opposite Sex. Zazzles' first point!!

I guess my decision to go ahead and give the Dallas show a shot paid off.

Saturday, we had an early ring time. We didn't win Saturday, but we did get a reserve. So, I went home and did my homework on the judge we would have Sunday.

Our judge for Sunday was Randy Garren who just so happened to judge Keeshonden at Westminster in 2010. That means, not only must he know his stuff, but there are videos available!!! So, guess who studied Randy Garren on Saturday night? Nope, Zazzles lounged around. I watched all of his judging from Westminster, so Sunday I knew exactly what to expect. I'm not sure if I can credit my preparation, or the fact that I have a really nicely bred show bitch, or maybe some of both, but Sunday was our day, too! Zazzles took another Winner's Bitch and Best Opposite Sex. Point number 2!

What a great first experience! Now, on to San Antonio!

Apparently I missed the part where it said that to be a top-notch blogger, one must post blogworthy events in a timely fashion. This is a skill of which I am entirely devoid. So, now, in an effort to compensate for my inability to write about things when they actually happen, I'll attempt to recap the goings on of Zazzles and myself and our "Texas March of Death" in the month of July. Hold on to your pants! This is going to be a wild ride.
Posted by Kellie Siekierski at 12:39:00 PM No comments: